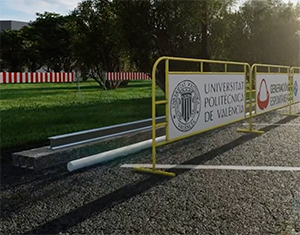 The Hyperloop team of the Universitat Politècnica de València will install in Cheste the test track to test their new subsonic train prototype. Once built, it will become the first lane of this type installed in Spain and one of the few in Europe. The team intends to carry out all the tests and validations for the Hyperloop Pod Competition IV.

Hyperloop is an idea of ​​means of transport based on a system of large vacuum tubes, which circulate some capsules capable of transporting passengers and goods with speeds of more than 1,000 km / h. At the end of 2015, the visionary Elon Musk launched the Hyperloop Pod Competition and encouraged students from around the world to participate by proposing ideas. Since then, the competition has held three editions, in which the UPV team has established itself as one of the best in the world.

Shortly, work will begin on the Ricardo Tormo Circuit, an area that has a capacity of 120,000 spectators and which hosts different scoring events of the Motorcycling World Championship. The length of the track will oscillate between 100 and 300 meters, which will allow the team to carry out studies on the suspension, navigation and levitation systems. It will be the first Hyperloop test track in our country and one of the few of this type that Europe currently has. The idea is to arrive ready for the competition that will take place in Los Angeles from July 15 to 21, 2019, and be able to fight for the victory.

To achieve the test track that presents the best performance, the team has launched a microwdfunding campaign on Kickstarter. Thanks to this initiative, everyone can sponsor one meter of the road (or more), and leave their name inscribed in one of the most exciting transportation projects of the future.
Although the team has exceeded the first objective, the campaign is still open until Thursday, April 25, 2019. If you want to help the 40 students who make Hyperloop UPV, do not hesitate.