WAKAMOLA: Researchers and students of the UPV devise and develop a bot to combat overweight and obesity

Researchers and students of the UPV devise and develop a bot to combat overweight and obesity, affecting 54.5% of the Spanish population 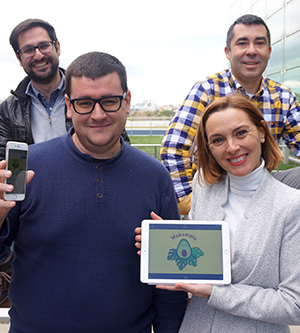 A team of researchers from the Universitat Politècnica de València (UPV), belonging to the BDSLab Group of the ITACA Institute led by Juan Miguel García Gómez, has developed Wakamola, a bot that will help to know the nutritional and physical activity habits of the population with the object of facilitating the treatment of two global health problems such as, at present, obesity and overweight.

Not in vain, according to data from the World Health Organization (WHO), more than 50% of the European population is overweight, and 20%, obesity. And, despite being the cradle of the Mediterranean diet, in Spain, the situation is similar.

According to García Gómez, principal investigator of a work carried out within the framework of the European project CrowdHealth, Wakamola is a bot that, through Telegram, simulates a conversation with the user about his diet, physical activity, diseases, age, weight, networks social, etc.

The subsequent analysis of this information will create a network of relationships to study the habits of the population in relation to their diet, physical activity, environment, family network, work and friendships.

An attractive, fun and usable bot baptized and designed by students of the ETSID-UPV

In this sense, Sabina Asensio Cuesta, researcher of the BDSLab Group, points out that a “remarkable aspect of Wakamola is the hard work done to build an attractive, playful and usable character for the users”.

To do this, researchers have developed different scripts and carried out an exhaustive study to choose the most appropriate design for the bot, for which they conducted a survey of 495 people on 52 possible designs proposed by students of the School of Engineering Design (ETSID) of the UPV.

From this survey arose the name, Wakamola, in addition to the character, designed by the students of the ETSID-UPV Mª Dolores Blanco, Ángel Esteban and Marta Lavall.

“The objective,” says Asensio Cuesta, “is for Wakamola to help collect a large amount of data from a population on their nutritional habits, physical activity, body mass index, obesity-related diseases and overweight, etc. At the same time, The bot will allow us to determine the importance of the environment on each user, for example, where he lives and with whom he relates (house, family or friends) .The analysis of the data collected by Wakamola can be very useful when preparing actions to try to solve the serious problem of overweight and obesity that our society faces “.

How does it work?

Vicent Blanes Selva, researcher at BDSLab-ITACA of the UPV and bot developer in collaboration with Taipei Medical University (Shabbir Syed and Yu-Chuan Li) explains that the operation of Wakamola is “very simple.” From Telegram, the user establishes a conversation with the bot, with questions ranging from your age or weight, to the type of food or the times of the week that you exercise, depending on the user’s answers, a score (Wakaestado) is shown between 0 and 100, depending on your nutritional habits and physical activity, diseases, body mass index and Wakaestado scores of your network, the bot also allows you to see the breakdown of Wakaestado corresponding to diet, activity, BMI, diseases and social network “.

On the other hand, for the adequate elaboration of the content and score of Wakamola’s questions about diet, physical activity and personal data (sociodemographic and of diseases), the advice of Ana Frígola, from the Faculty of Pharmacy of the University of València, as well as doctors Juan Francisco Merino Torres, Matilde Rubio Almanza, Salvador Tortajada and Ruth Vilar Mateo, all of them from the Hospital Universitari i Politècnic La Fe.

Wakamola is being used, for the first time, in Tavernes de la Valldigna. Thanks to the collaboration of the town hall of the city, until the end of February, this Valencian town will house the pilot study.

Alberto Conejero researcher of the Wakamola project and member of the IUPAC Institute of the UPV, indicates that the inhabitants of Tavernes de la Valldigna “can participate voluntarily in this work, in the same way that, for years, it has been done to the American population of Framingham with in order to study the risk factors of coronary heart disease. ”

Finally, note that, to know the bot Wakamola and participate in this pilot study, just look at Telegram @WakamolaTavernesBot or access the following link.