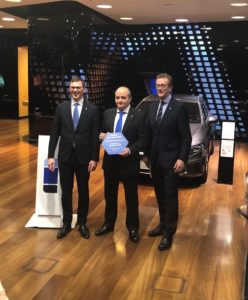 José Puchau Gadea receives the award for the best personal success project in the “KAMAX KPI-Award Ceremony” held on January 25, 2019 at the “Mercedes Benz Gallery” in Berlin.

José Puchau is an associate professor at the UPV and teaches at the Master’s Degree in Design and Integrated Computer-Assisted Manufacturing (MUDFIAC) of ETSID. The aforementioned award has been granted for his global training project in which the creation of the “Training Center” stands out in the production plant that the KAMAX company has in Museros, where José Puchau is the Director of Engineering and has led training projects during the last 22 years.

The awards were presented by KAMAX on 25-01-2019 at the “Mercedes Benz Gallery” in Berlin, which is called in KAMAX “KPI-Award Ceremony”, because it refers to the indicators of the Company.

Once a year, the GMT (General Management Team Meeting) is held, which includes the awards ceremony. The prizes are worldwide, that is, they compete for all the KAMAX Group plants, located in Germany, Spain, China, the Czech Republic, Slovakia, USA and now also in Mexico.

These awards are the following:

The prize for the best personal project is the one that has been awarded to José Puchau this year. This project deals with training at the global level, especially for production operators. Of course, the creation in 2014 of the Museros Training Center, which has been a key point for the achievement of this award, has influenced this.

It has been very important the data presented, of formations:

As José Puchau points out, “In the end this award has been achieved with the work and effort of a whole team, whose main task is to prepare production and not training, but in spite of everything, time has been taken, not He knows where to do all the training tasks, the training I have done in China, Czech Republic, USA and Germany has been very important, although the other key point has been the implementation of the DUAL Training in KAMAX, in which we have Valencian girls working in the USA and Germany with established periods of time, this year will also be sent to the Mexico Plant. “