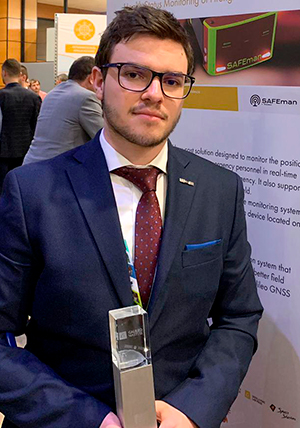 SAFEman, the advanced system to improve the protection of firefighters and their communication with emergency centers before a forest fire created by Jorge Sancho Muñoz, student of the Degree in Aerospace Engineering at the School of Design Engineering of the Polytechnic University of València (ETSID-UPV), has been proclaimed winner of the Comunidad Valenciana Challenge of the European Satellite Navigation Competition (ESNC). It is also the second time that, consecutively, Jorge Sancho achieves the victory in the aforementioned contest. In addition, it should be noted that SAFEman has been chosen by the European GNSS Agency as one of the ten best projects of this year.

A bracelet and a system integrated in the helmet

SAFEman is made up of two devices: a small bracelet (similar to those usually used for sports) that is responsible for monitoring the firefighter, and an integrated system in the fireman’s helmet that includes all electronic elements, antennas, etc. , in addition to some signal lights for, in case of poor visibility, to be located more quickly. In case of forest fire, SAFEman allows to have located in real time – through GALILEO, the European GPS – to all the members of the fire brigade, so that you can see if the fire is enclosing them and, in such case , trace the most optimal escape route. In addition, the wristband allows the firefighter to send an emergency signal to the control center, or if it detects that the firefighter is on the ground and does not move, or has the pulse too high or too low, directly, an emergency signal is triggered for your evacuation.

“The system,” explains Jorge Sancho, “allows continuous monitoring of emergency equipment at a relatively low cost and individually, instead of having just located a point, which would be the entire brigade.” In addition, a communications network is formed between the fire brigade to get the signal to the control center. “In case this is not possible, for example, in a very closed valley, you can use my idea from last year, Stratolloon, as a high altitude repeater to get the signal,” says Sancho.

David Argilés, managing director of the Valencian Space Consortium and coordinator of the contest in the Valencian Community, affirms that, with his triumph of this year, “Jorge Sancho has become the first person to win two consecutive editions, which is worth mentioning taking into account the high quality of the proposals we receive. ” In 2017, his Stratolloon project was also selected as the best in the whole Valencian Community and chosen among the ten best in Europe. Stratolloon is the first system in the world that guarantees the controlled landing of payloads from the ground to the stratosphere and vice versa. In addition, it also incorporates a monitoring application that remains active throughout the flight. “Likewise,” adds Sancho, “in the future, Stratolloon will serve as a communication platform for exceptional situations, so that it will avoid having to locate base stations on land, which SAFEman could benefit from”.

The European Satellite Navigation Competition, which celebrates its tenth edition this year, rewards the best services, products and innovations that use satellite navigation in everyday life. Its long-term objective is to strengthen Europe’s competitiveness with high-tech space solutions on a global scale. The coordination of the European Satellite Navigation Competition in the Valencian Community is carried out from the Valencian Space Consortium, in collaboration with the five scientific parks of the same: Espaitec – Parc Científic, Tecnològic i Empresarial (Universitat Jaume I de Castelló), Polytechnic City of Innovation (UPV), Parc Científic (Universitat de València), Scientific – Business Park (Miguel Hernández University of Elche) and Alicante Science Park (Universitat d’Alacant).